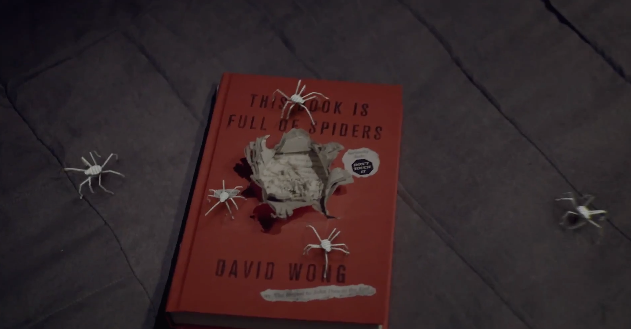 David Wong.
He's a brilliant author. This Book is Full of Spiders is the sequel to his first book, "John Dies At the End". Wong has this very unique writing style. Not only humor is part of the books, but he uses humor as an essential ingredient to build up the stories. The ridiculousness served is truly unusual and refreshing and definitely absurd. The kind of combination of comedy and horror that I have never seen before. 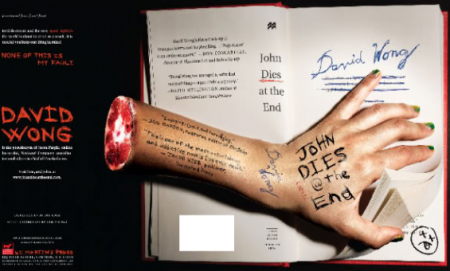 If you have read David Wong's first book then you will easily find yourself liking his second, and vice versa. To me David wong has set a very high standard of excitement in the first pages of This Book is Full of Spiders, and is becoming even more terrific till the end, which is not at all an easy task. I can assure you I never got bored even for a second throughout the reading.

One thing I haven't been able to figure out is how David Wong seems to perfectly keep his readers' tension, anxiety, and fear in check while rapidly throws jokes that don't fail to produce laughter. This is one of two books I have read more than once. The other is Fifty Shames of Earl Grey (the parody of Fifty Shades of Grey), but it's somewhat different because Fifty Shames is all jokes and silly. Five stars for This Book is Full of Spiders. 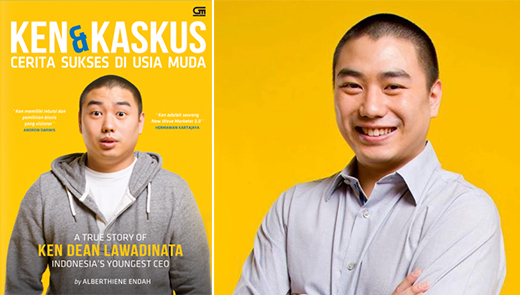 I was the first to borrow this book from our office library. Pertamax. The cover has this pretty mikado yellow color dominating the book, which overall I'd say is pretty eye-catching and makes me want to grab the book off the shelf and see what it looks like inside, because the look of the content is very important to me. The book has 301 pages and the inside looks a little spacious but not too much. Subsequently I tried to read a few paragraphs from a random page I turned to. The writing style didn't sound too weird to my taste so I decided to read this book from the beginning.

Fyi, I am not  much of a kaskuser but let me inform you about the website from what i know. Kaskus is a large Indonesian online forum that believes in freedom of speech. It has many special terms and abbreviations going around among the users and I haven't bothered trying to remember/understand/use many of them. If you ask me, the forum looks messy like D-adicts but has many diverse subforums like 4-chan. Maybe not the best comparison, but to me they're like that.

Back to the book. Until one third of the book I couldn't really figure out what kind of point this book has set for its readers. Like, what is this book really wanting to talk about? The book starts with his childhood and his views on Indonesian teachers and schools that he thinks don't sharpen students' creativity and only force obedience without wanting to be questioned. Call me impatient, but 100 pages about such a topic is taking too long.

And finally, at page 101 he starts talking about how he met Andrew Darwis, the godfather of Kaskus. This is when the book is starting to be interesting because it focuses on how Kaskus was ever created. It has informational and unique personal happenings. Finally! But then after this book starts focusing on Ken again i decided to put down the book. That's when I thought, "Why is Ken (or his ghostwriter) writing this book? This should have been written by Andrew Darwis himself." But then I picked up the book again the next day.

I guess the choice of title of this book is a very right decision. Ken & Kaskus. Kaskus is Andrew Darwis. A book about Kaskus ideally would be a book about Andrew Darwis, Andrew's past, Andrew's childhood, Andrew's philosophies, Andrew's personal occurrence, Andrew's upbringing, and Andrew's etc. Even by reading this book, I can easily see how Andrew is supposed to be the main cast. But since this book has "Ken" in it, then it should be talking about Ken in a large portion, too.

After I reached almost at the end of the book, I finally got the relevance of kaskus and Ken's childhood stories. But still, 100 pages is still too long.

Another critique, the story about how Ken had a junkie friend whom he was initially pretty close to is definitely irrelevant. He had a friend. He spent much time with Friend in that Friend's room. He watched Friend smoking cigarettes. He watched Friend smoking marijuana. Good thing Friend never told him how great it was to smoke marijuana or tried to get him into smoking it too. He then thought it was not good to spend much time with Friend anymore. He then left Friend and years later he put the story in a book and said to the readers, "Phew guys. That was close". Like, seriously.

So all in all, to me the stories about Ken alone are not very inspiring or anything, but it's still a pretty good book because it has Kaskus and Andrew.

Spa has been known to offer treatments for regenerating the body and mind. The hectic days of city's busy life will sometimes remind me to gain energy and unwind in the most enjoyable and natural way that only spa treatments can fulfill.

Spa at Maya Ubud seems to be the perfect spot for my taste. The scenery it offers with green tall trees, refreshing air, and the peaceful quietness along with the beautiful sight of water and open skies will surely, I believe, ease any weary individuals.

That's why the person I'd like to go with would be my retired father. A 53-year-old man who has worked for over two decades taking care of his family deserves a delightful treat for his mind, body and soul. And I am sure Spa at Maya Ubud knows well what's best for their clienteles.

So i am gonna talk about how this Japanese drama ends. Spoilers, spoilers everywhere.

Itazura Na Kiss drama in 1996 was one of the very first J-dramas I watched back in the day, along with Long Vacation and Beach Boys. I don't quite remember the stories but the plot was pretty much about a stupid, not-so-very-attractive girl falls in love with a good-looking, smart, and nerdy boy. I was in the mood of reminiscing when I decided to watch this drama.

Turned out this drama is played by a very cute girl and a way older guy as a main actor. They differ 10 years of age in real life, but the guy looks pretty young and expressionless most of the time. And this drama is also about foods. Damn, so many tasty-looking foods here *drools*.

At episode 11 and so on, i was starting to feel bored and realised that the drama can be so dragging, lots of unnecessary scenes with insignificant short scenarios. And some happenings just don't quite make much sense to me, but I let them slip, because it's a Japanese drama after all.

What i liked the most was when Irie Naoki (the main guy character) seemed jealous and did things out of jealousy but still didn't want to admit that he had feelings for Aihara Kotoko (the main female character). It's just pretty funny to me. ~Le sigh~

Now, pics taken from the last episode. Ahhhh, too bad it's finished. 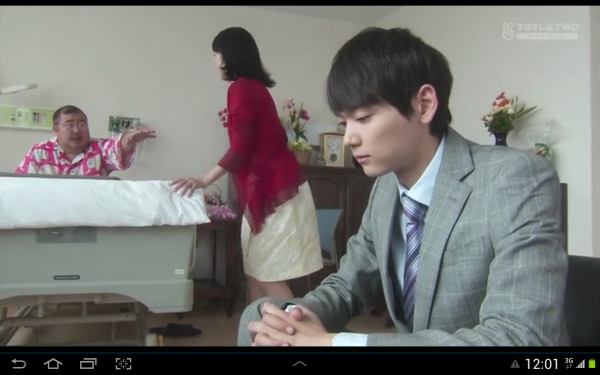 Btw the girl is very pretty. She's only 16. I really want her to be more popular in Japan and play in more dramas. She's pretty good as an actress.

These guys need more attention! They were pretty big back in the day until the band kept changing members and the singer is the only one main member left but I think whoever the band members are, they still rock hard! Or not really, I haven't listened much to their old stuff, but their latest album in 2012 "Candy Coated Furry" is kicking.

The songs, themes, and lyrics are things that many people can relate to and they write it in a pretty humorous style and the music arrangement is pretty catchy. Ska is sooooo kewl when they're playing it. I guess it's because their music is mixed with a lil bit of punk and rock too.

I have a business. I mean, I sell stuff. Anyone interested in rechargeable can speakers? Please take a look under the cut for two pics.

It comes with three head types of cables. You can plug in a microSD card, flashdisk, headset, a charger, and connect the speaker to your laptops, cellphones, or computers. Built-in 550mAh lithium-ion polymer. Built-in 45 mm full-band speakers, wide range, the maximum power up to 3 W. It also enables you to listen to FM radio. I have a coca cola speaker myself and it's proven to be able to produce very loud sounds. From personal experience, the battery life can last from 4 to 7 hours of active listening. If you want more pics, I can provide them to you.

I only ship the goods within Indonesia via JNE. If you live in Medan, it will be free of courier charges!
Types of cans : coca cola regular, coca cola zero, Heineken, fanta, Anker, Bir Bintang, Guinness.

I am setting up my facebook page, once it's done I will link it to you. I will also be selling women's apparel. Just wait for it! Or don't. Let it surprise you.